A home for enthusiasts of classic RWD Mitsubishi

This was the other car I purchased along with the blue 75' and the pile o parts. It is a 74' that has bits and pieces from a GT model such as the exterior emblems, tach dash and console, the 4 slot wheels, and the rear seats. Other than a rusted out lower rear right side fender and some rust thru on the right lower door, the rest of the car is pretty much rust free. (unlike the blue one) And other than the left fender and some minor roof dents (probably due to things being stored on it), the body is very straight. For now, the thought is to do a full restoration, but not to stock. I have been known to change my mind from time to time, but I am thinking I want to do this as a street sleeper with an aluminum LS motor/5 speed (or 6 speed if it fits without tunnel mods) and possibly a Ford 8.8 diff. Will need to eventually look into a big brake setup for the front and discs for the rear as I would be shooting for 400+ hp. Probably do a mini tub in the back to get some big tires back there so it has a chance to hook up. 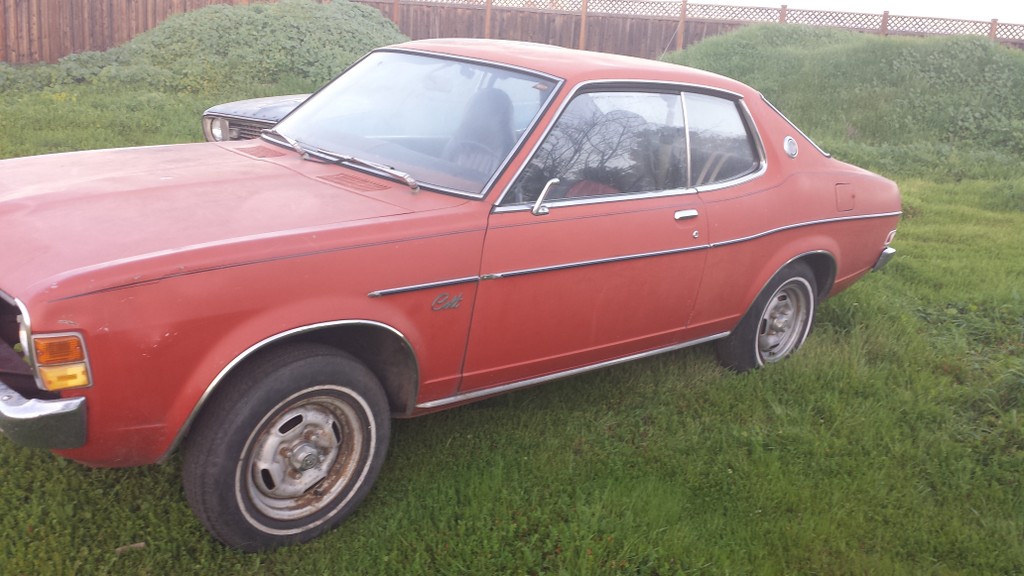 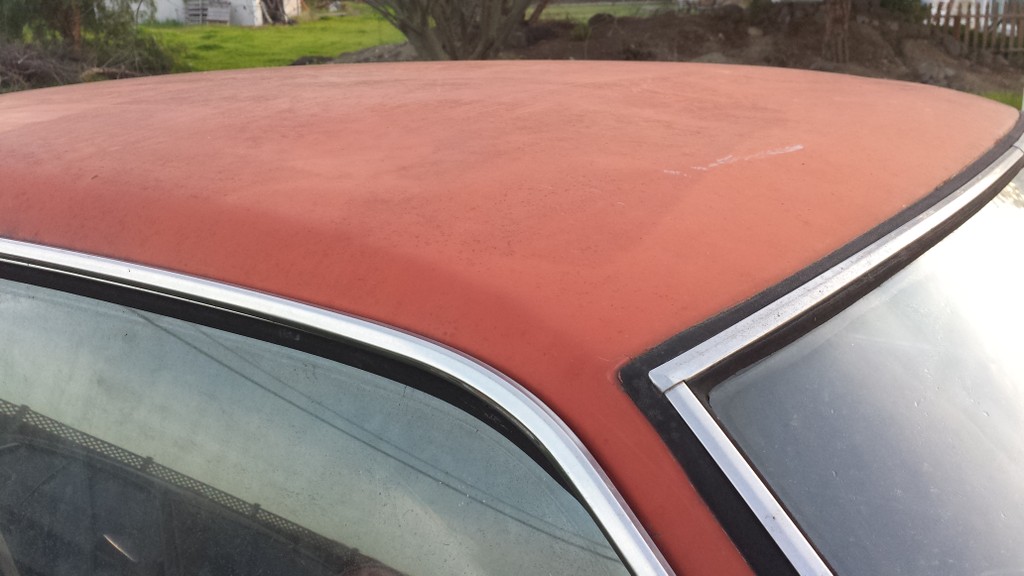 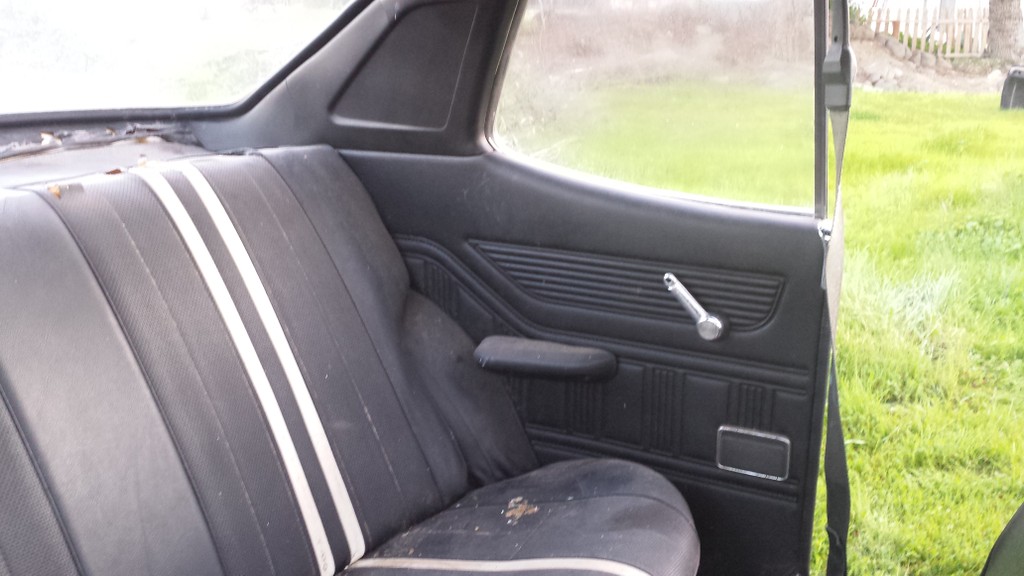 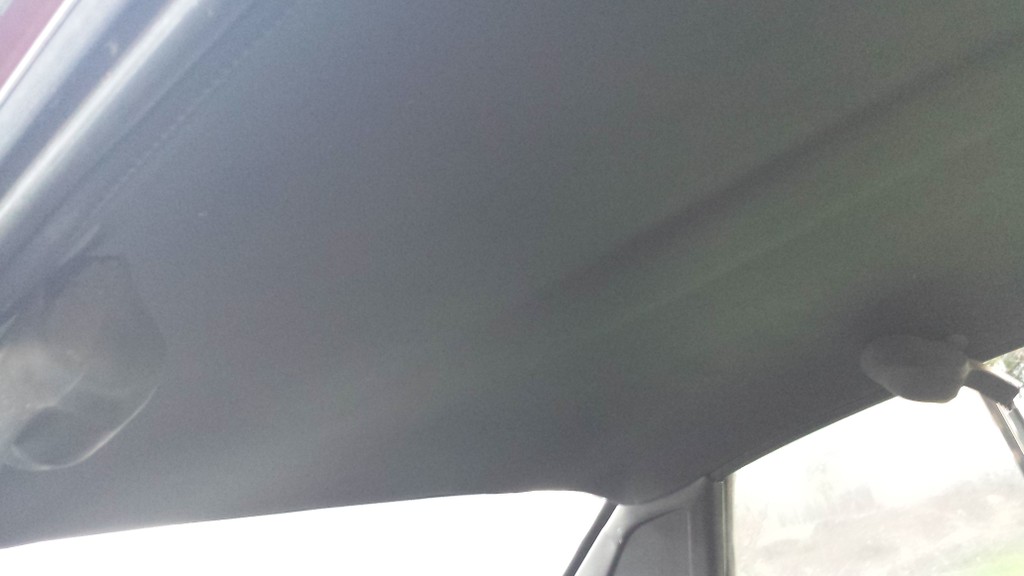 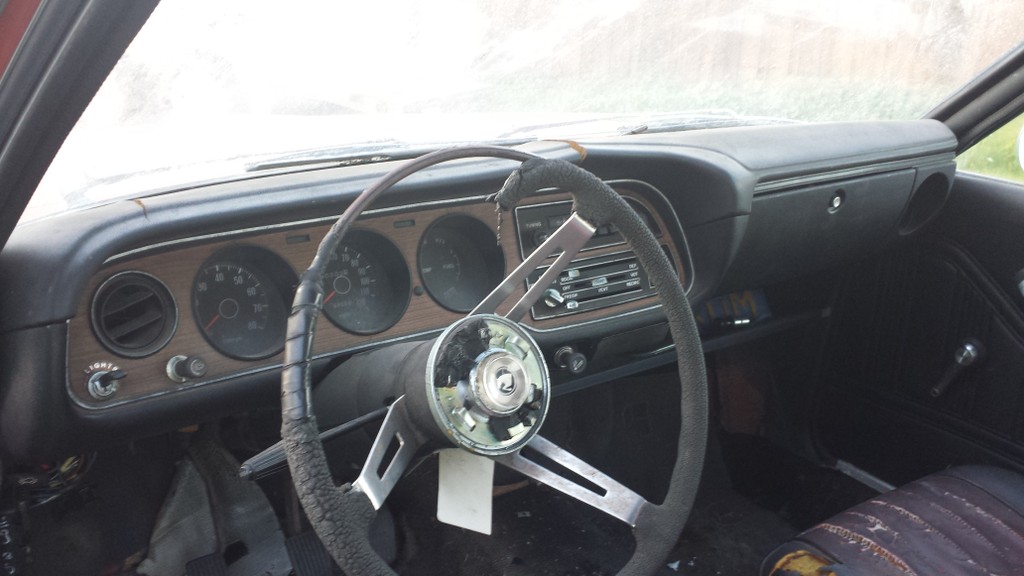 I got this with the engine and trans pulled and the story was the PO took it to a shop for some reason I forget (I think is was because he got it after it had sat for some time and was trying to get it back on the road) and they told him the engine was shot. I was told the PO did not want to pay to have the engine rebuilt or replaced and either he told the shop or the shop tossed the motor (why I needed the block mounts). So the original motor is gone, but the trans and all the other drivetrain parts are in the trunk. The trans has been either rebuilt, or just cleaned up and painted. Lucky for me there was the old motor that was in the blue car that I was told ran, but was tired (smoked). I decided to pull that motor apart as see if it was worth a rebuild. Everything looked good except for stuck rings so I went ahead and did a budget rebuild. Since the bored looked good with only minor taper, it got bottle brushed along with new rings, all new bearings, new timing chain/gears, and a rebuilt head with new guides. If you notice, this motor had been most likely rebuilt in the past because it has oversize pistons. 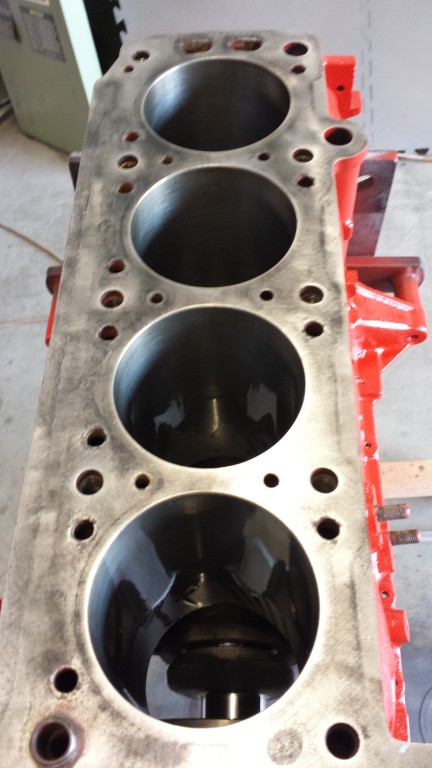 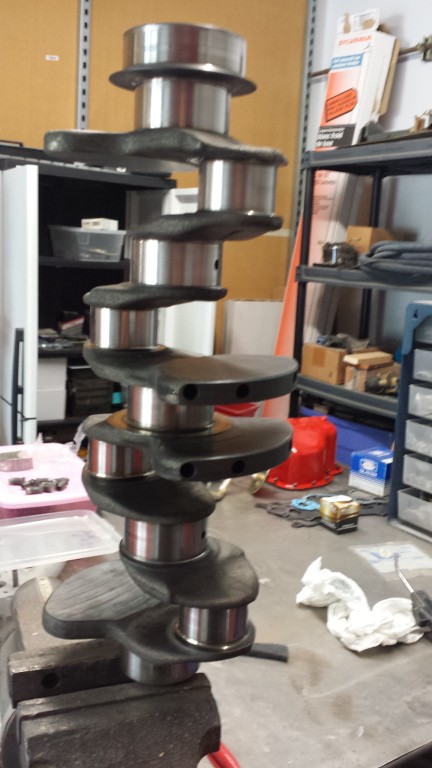 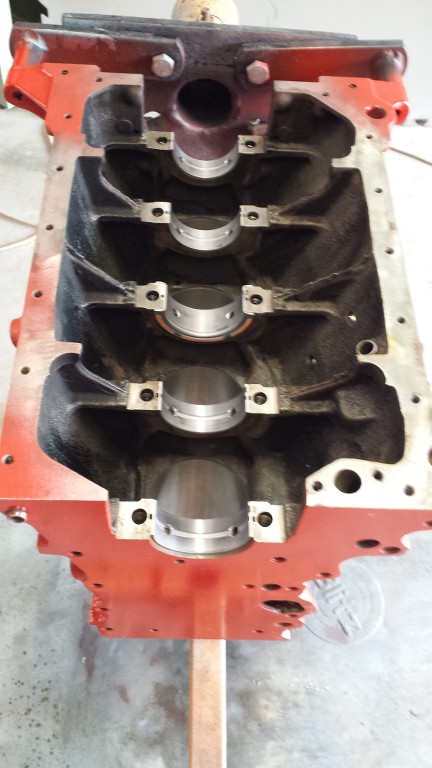 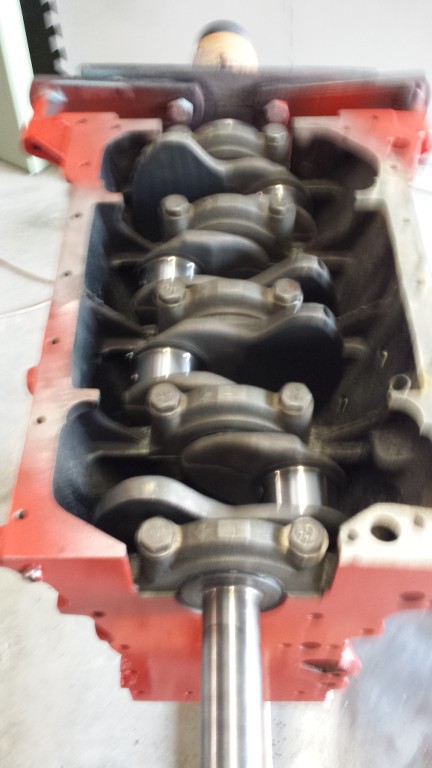 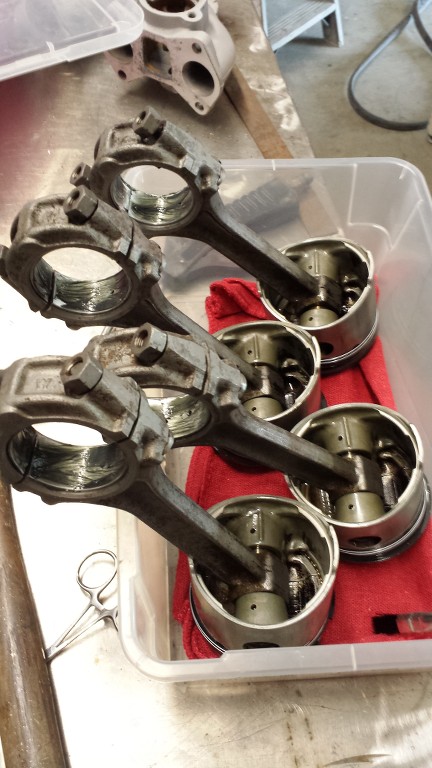 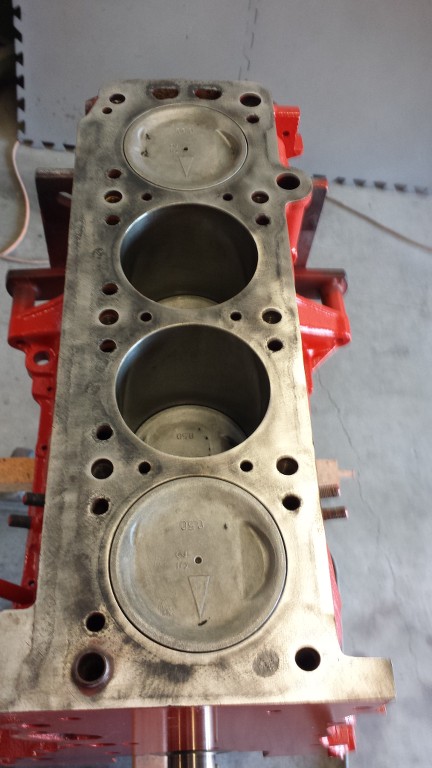 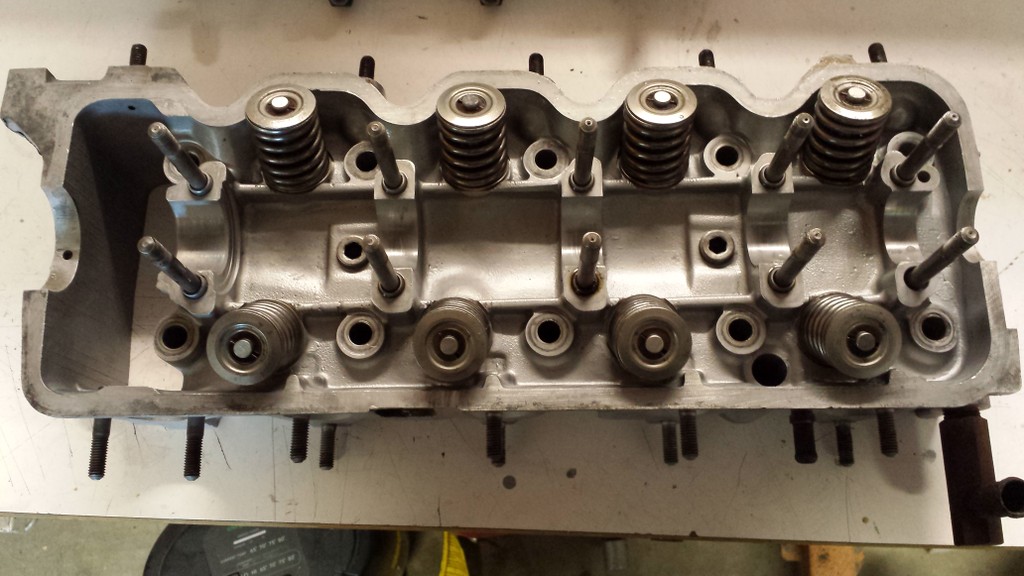 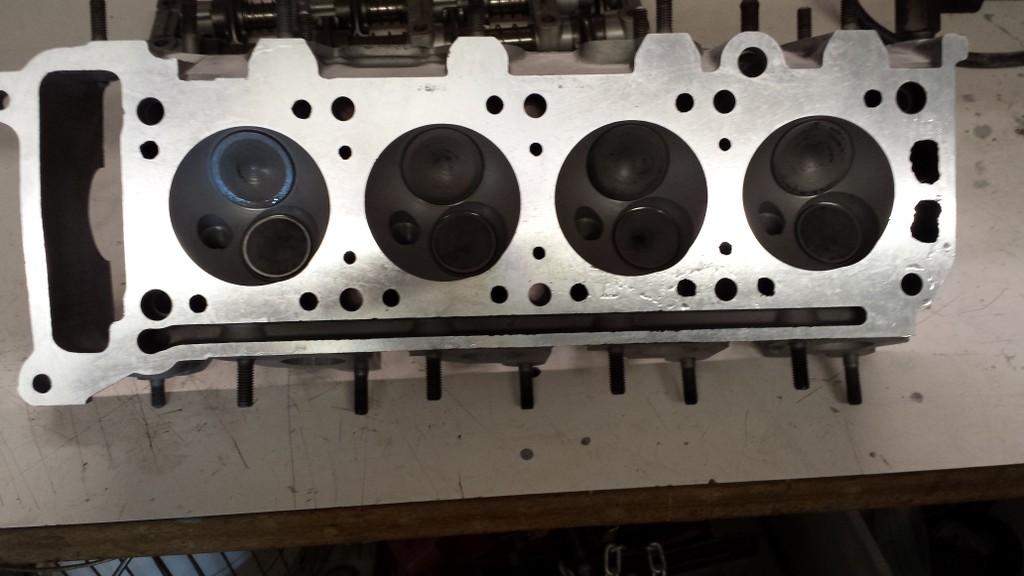 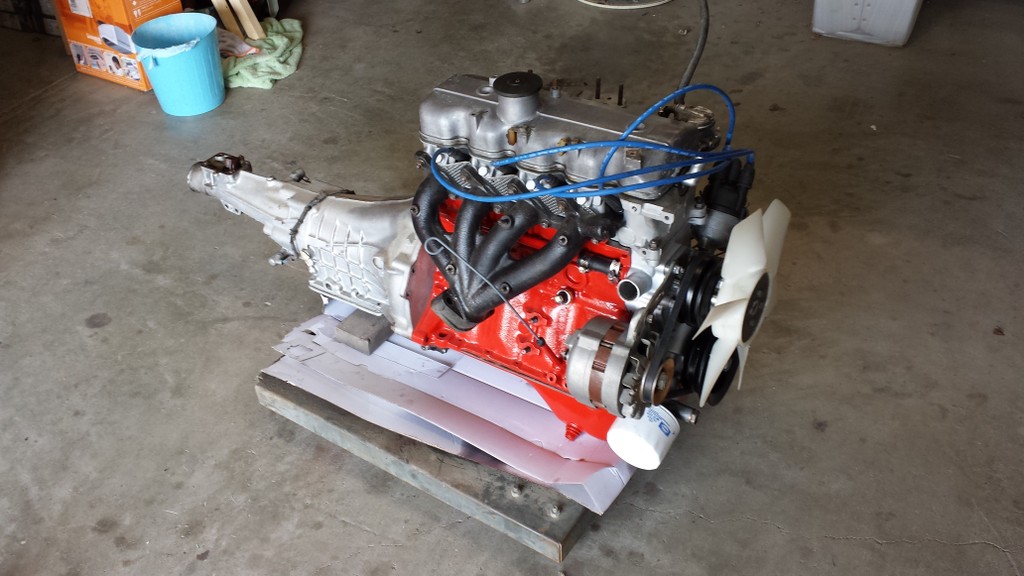 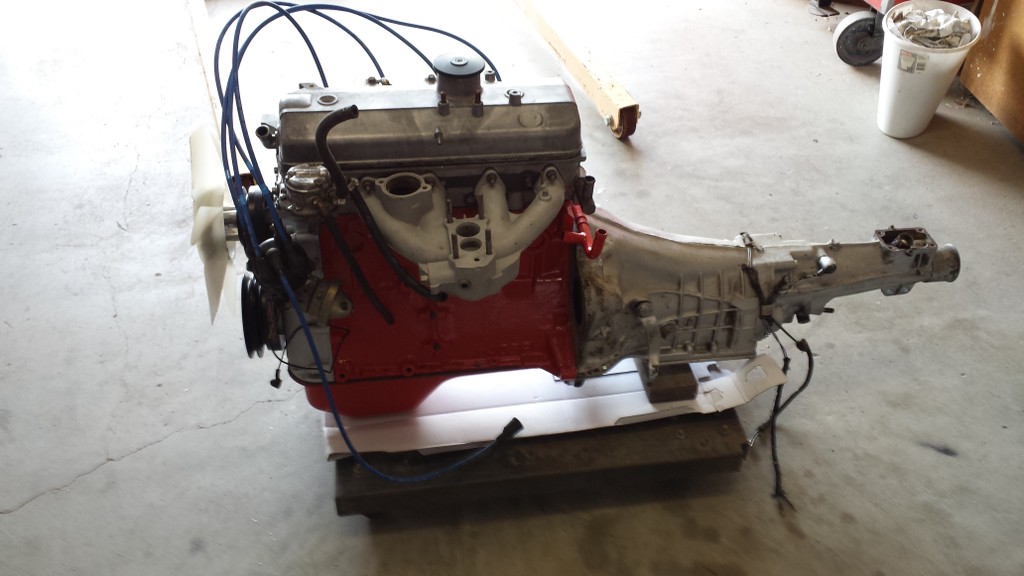 Need to get some more pics to update where it's at.
Top

Dropped the engine in yesterday and started it up briefly. Need to pull the carb and clean it up as it won't stay running by itself. Kinda figured that, but figured I'd try. I am considering a weber, but since I don't plan to keep this motor, I really don't want to send the money for one. 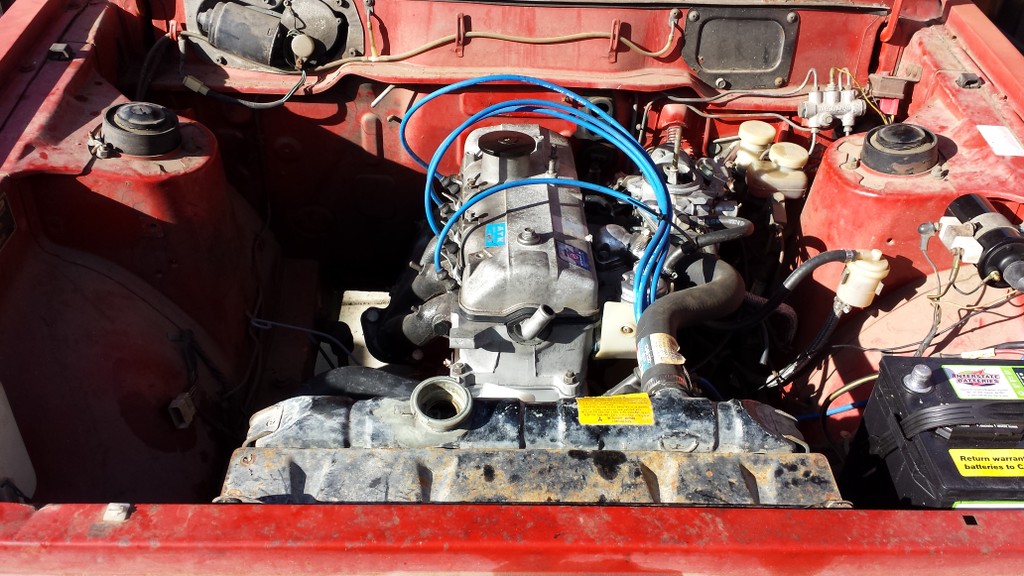 I also replaced the rusty right side fender and door with parts that came with it. Decided to install the grille and side markers too. 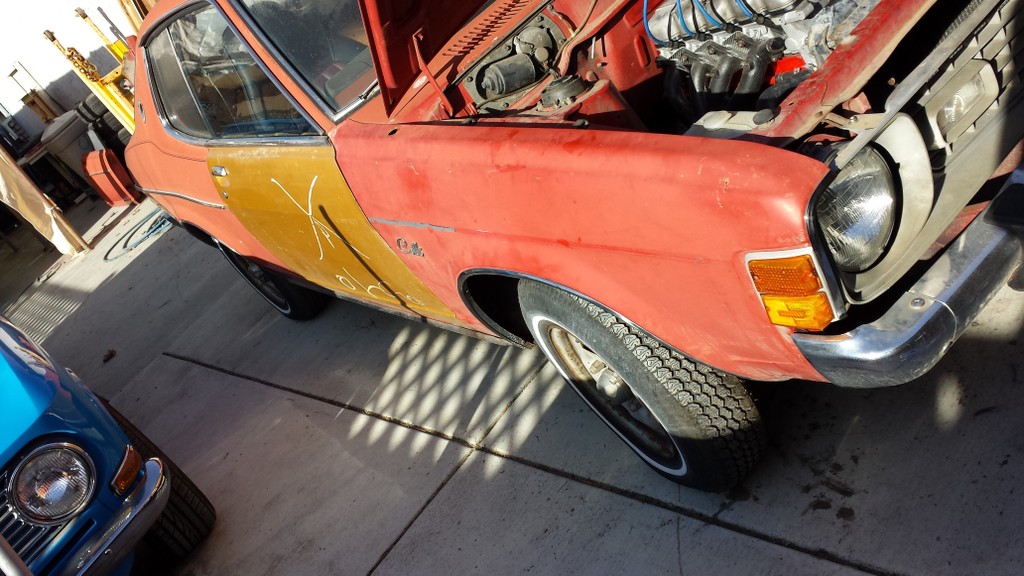 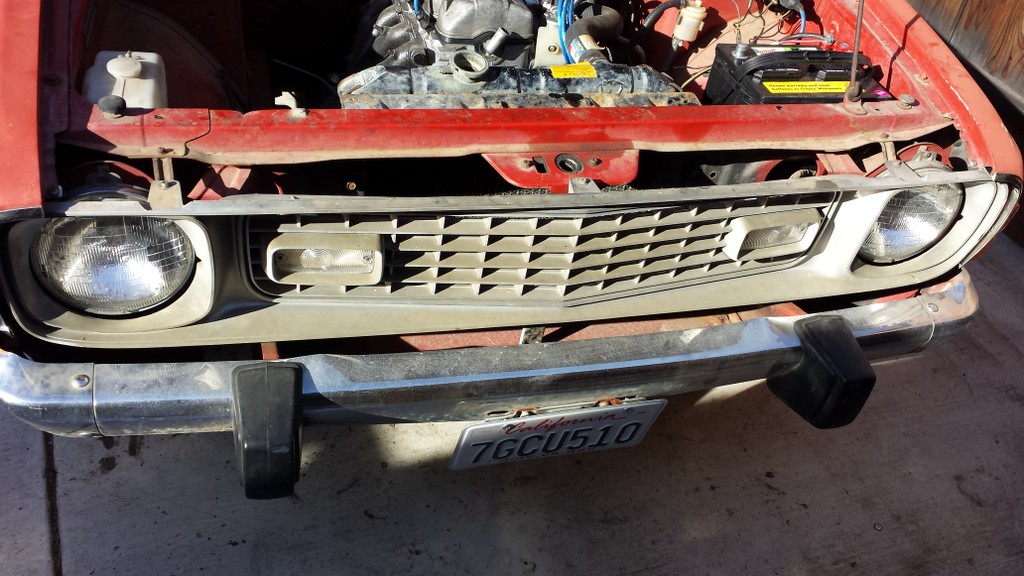 At some point, the original alt connector must have melted so this was someones idea of a fix. 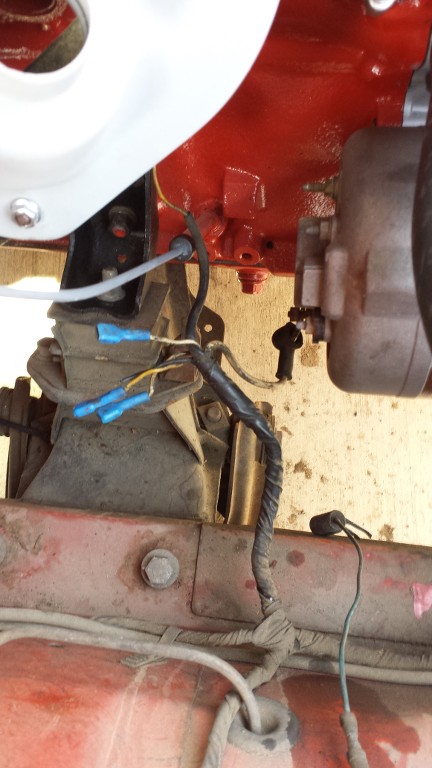 So a *new* connector and a little solder and it's back to how it should be. 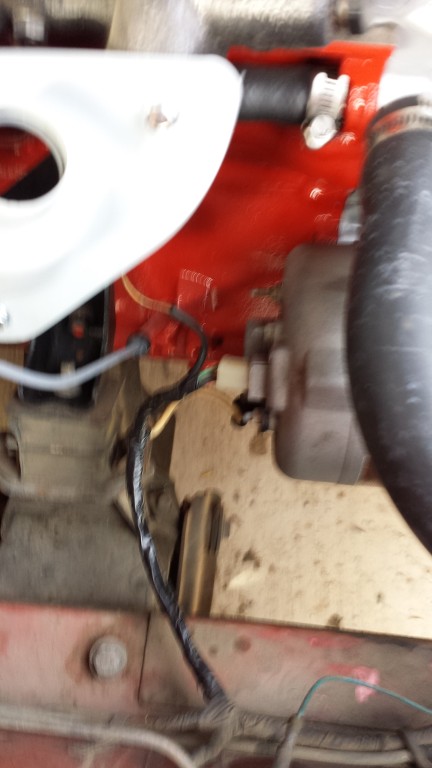 Waiting on a voltage regulator and a carb kit then we'll try running it again and see if there are other issues.
Top

I've not had hardly any time to start working on this over the last couple years other than selling the rebuilt engine out of it. Well, just recently having shoulder surgery has left me with some time on my hands to scheme

. I think I have a slightly new path I'm going to take, mostly to keep the cost down a bit as I have spent a lot of free cash working on the new house and more importantly for me, the shop! Anyways, probably will find a clapped out Dakota and use the 318 with probably a T5 trans or maybe the A500 auto. Going to lower the target hp to the 300-350 range so the drivetrain does not need to be as sturdy. Going to use a Holley Sniper EFI setup, maybe some Edelbrock heads and a decent cam. For the diff, I might be able to use a Ford 7.5 with the lower power expectation if I cant get a deal on a 8.8 that wouldnt need a ton of $$$$ in shortening. Doing some searching it seems a Ranger unit might be the ticket as it close to the same width and supposedly easy to shorten a little and stock axles. still trying to figure out what to do to the front to get 5x4.5 hubs. the easiest would be to just find hubs/rotors to fit the stock spindles and I can figure out brakes and a coilover setup unless there is a strut that would bolt in. i think i remember the widebody starion struts(5 lug) have the wrong angle or something like that.
Top

Have you looked into a 1UZ at all? The most expensive part is deciding on which adapter to go with for a manual trans. Its the swap I'm doing into my wagon with a W series trans and a shortened explorer 8.8 rear axle. Are you sure about the Ranger axle? The explorer axle is probably the most sought after 8.8, being the narrowest at 59", comes with disc brakes and you can shorten it to 56" with using another right side axle shaft. This is what most AE86 guys go with when they do the 1UZ swap.

I know from my old yellow coupe, a 53" toyota 8" axle keeps +15 wheels under the guards, 56" shouldn't be too terrible. Luckily for my wagon, the now 56" shortened axle is the same width as the factory axle.


Will also be throwing one into the Starion sometime this year too possibly, since the dohc 4g64 threw a rod last spring. On the plus side the 1UZ weighs as much or a little less than a g54b.

As for the front, have you looked at maybe ae86 corolla stuff? Opens up the options for coilovers, wilwood brake options, and Technotoytuning has dual pattern (5 lug/4lug) billet hubs which would solve that dilemma there. That's the direction I'm looking, since those cars have the same basic front suspension setup as our cars.
There's no point to looking at something like Starion struts and hubs (narrowbodies have the correct struts), you would still be in the same situation eventually for parts sourcing for spares or even now trying to get someone to let go of their struts.
Tim
76 Colt GT Hardtop
79 Colt Wagon
88 Starquest
92 Galant VR-4
94 Montero SR
Top

I have looked at the 1uz and the vh45 engines in the past. The main reason I pivoted toward the mopar is the car is a “mopar” and I tend towards Mopars. There is also the fact performance options are more readily and cheaply available and the *technology* is stone ax simple. I am looking toward the ranger axle because it seems everyone is after a disc brake explorer axle and I could care less about disc brakes. The ranger axle can be easily shortened in the same matter and is easily found. I have access to narrowbody struts. Are you saying those are *bolt on* with the correct spindle angle? Would the widebody 5 lug hubs swap the narrowbody spindles? Could come up with a modified wilwood rotor/hat and custom caliper hanger.
Top

the hubs are interchangeable, it's just the spindle angle is different between the two bodies. If you were to use widebody struts, you would need to use the matching widebody LCAs plus converting the crossmember over to that of a Lancer one and running tension rods as well. Or run modified A arms to lengthen them. But seeing as you have the narrowbody struts its easy peasy in that regard. Long ago I was hunting for narrowbody struts but no one wanted to give up their spares, so I started looking towards other makes to help keep my cars on the road into the future. The AE86 Corollas have the best aftermarket support when it comes to suspension for much of all the makes in that era with the spindle on strut design. They just simply have the largest following and can even get brand new parts like Spindles, that's all. There is a starion wilwood kit out there floating around on ebay.
Tim
76 Colt GT Hardtop
79 Colt Wagon
88 Starquest
92 Galant VR-4
94 Montero SR
Top

I understand on wanting to have future parts availability, but I highly doubt I would ever have to replace any of the parts putting less than 1k mikes a year on. Also, the thinking is the 5 lug hubs would match the ford 5 lug pattern therefor saving on having to have the ford axles redrilled to the 4 lug pattern. There probably are 5 lug hubs for the ae86 struts but probably cheaper to use oem stuff.
Top

Should be a interestijng project. I think id do a ls aluminum block over the mopar. I mean once you v8 swap does it really matter the brand. I'm not a big chevy fan, but they are light and I think the ls will help keep the car feeling better.

Either way, it will be nice to see some progress.
Top

I agree some progress would be nice.

I am really wishy washy on this. I may just put another 4g32 in there and sell it. Don’t know at this point.
Top
Post Reply
9 posts • Page 1 of 1

Return to “Our Cars & Projects”

Users browsing this forum: No registered users and 1 guest